Working alongside BBC's production unit on an OceanX vessel, Jennifer spent weeks at sea in a remote stretch of the Pacific to find and film the extraordinary, rarely witnessed "boiling sea" phenomena - created when a school of dolphin 5,000 strong converged on a school of lanternfish, causing the open ocean to seemingly boil with life.

Blue Planet II aired in over 200 countries and territories worldwide. A few highlights: it was the most-watched show in the UK in 2017, and reached over 220 million people in China, where it slowed down the internet on its release. The UK House of Parliament passed a tax on single-use plastics that name checked this series, as did the creation of a UN Panel on plastics in the ocean. 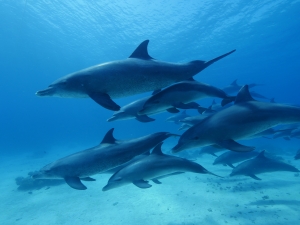