A global journey to explore the world’s least known and least explored habitat, this 3D film was shot over four years across the globe. Methane volcanoes on the bottom of the Gulf of Mexico, the icy depths of Antarctica, and the urban beauty of Miami’s port are just a few of the locations featured. This 3D film was created alongside Blue Planet II, the landmark tv series from the BBC.

Check out film's trailer below, or find out if it’s in a theater near you here. 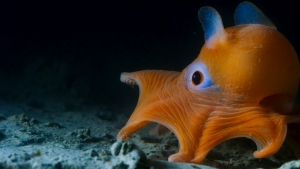